A little over two minutes had gone in the United States’ Concacaf U20 semifinal against Honduras when centre-back Brandan Craig stepped up to swing in a free-kick from the left-wing.

It was unusual to see a 6ft1in central defender taking free-kicks. Even the defenders who do participate in such situations are usually there to blast shots on goal rather than deliver delicate crosses into dangerous areas.

But this is something Craig has already been doing for Philadelphia Union II. In a set-piece designed on the training ground, Craig surprised the Honduras defence with a quick ball into the box, where Union teammate Paxten Aaronson was on hand to turn the ball home for a 1-0 lead in the third minute.

They repeated the trick in the final against the Dominican Republic for the USA’s fifth goal in a 6-0 win, with Craig sliding a low pass through to the lively and alert Aaronson. The 18-year-old rushed to celebrate the goal with coach Shaun Tsakiris who, as one of the assistants to head coach Mikey Varas, had helped the players with these set-piece routines on the training field. 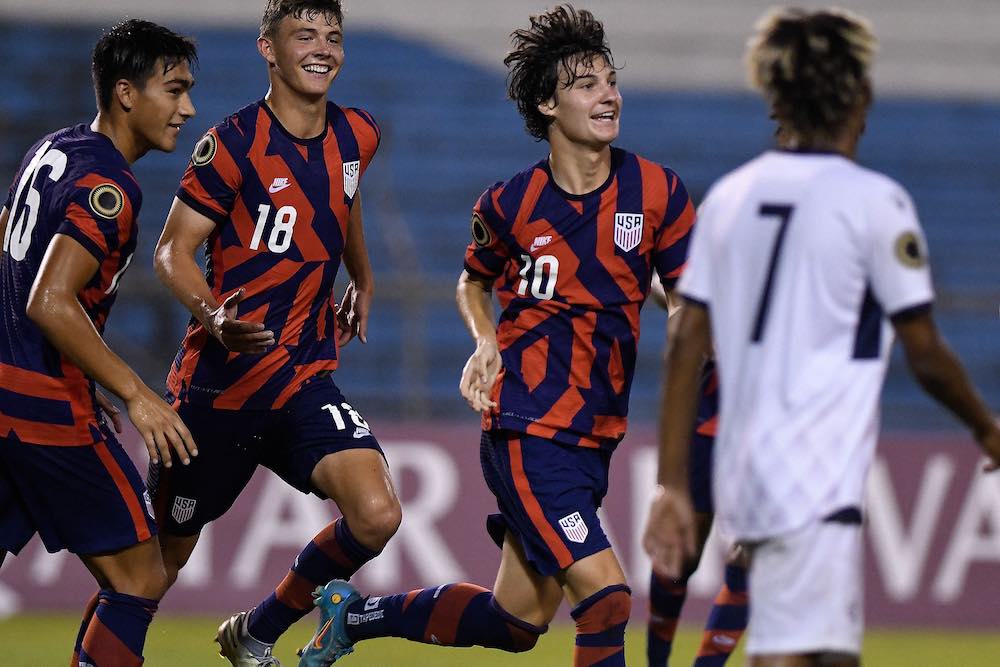 US’ Paxten Aaronson (2nd R) celebrates after scoring against the Dominican Republic during their CONCACAF Under-20 Championship football final, at the Olimpico Metropolitano stadium in San Pedro Sula, Honduras, on July 3, 2022. (Photo by Orlando SIERRA / AFP) (Photo by ORLANDO SIERRA/AFP via Getty Images)

The younger brother of Leeds United-bound United States senior international Brenden, Aaronson has been playing as a central forward for this U20 side in a formation that’s not too far removed from that which Jim Curtin employs for the Union.

He drifts between the No.10 and No.9 positions and this may lead to him being dubbed a false nine, but most of the time he is very much a player who leads the line in this setup. He lurks, ready to press or drop deep in defence and ready to receive the ball in attack, either in the hole or on the shoulder of the defender.

Not much adapting to do for those Philadelphia Union players in the #USMNT U20 side. Their formation isn’t too far off Jim Curtin’s #Doop Diamond given the way Paxten Aaronson played as a No.10 / No. 9. pic.twitter.com/UWBV74hiJF

It could be said that the Union may have been better off having Aaronson, Jack McGlynn, and Quinn Sullivan available for recent MLS games, especially with Sergio Santos unavailable and the need to rotate when games are being played roughly every three days. (Craig is unlikely to get in the team ahead of Jakob Glesnes, Jack Elliott, and Stuart Findlay at this moment in time.)

But this time spent with the U20s could benefit these players greatly in the long run.

They will return to Philadelphia match fit and as better, more experienced players, having won the Concacaf U20 Championship itself and also qualified for two future competitions. Aaronson finished the tournament as its top scorer with seven — one ahead of Sullivan — and was also named its best player. Between them, Union players scored 15 of the 31 goals the United States scored at the tournament. 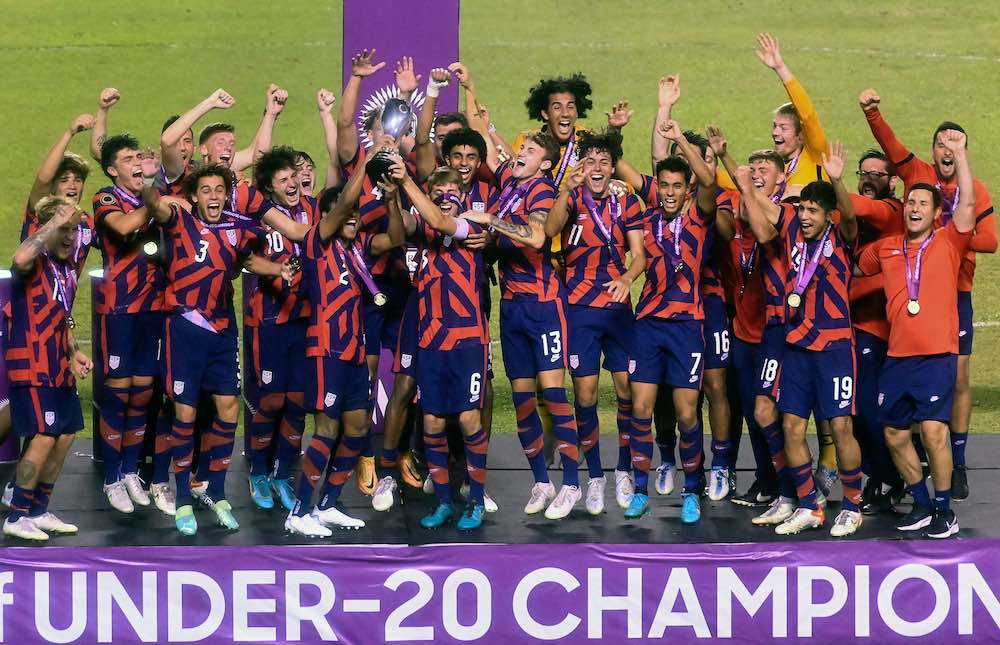 US’ players celebrate with the trophy of the CONCACAF Under-20 Championship, after defeating the Dominican Republic in the football final, at the Olimpico Metropolitano stadium in San Pedro Sula, Honduras, on July 3, 2022. – The US, along with Dominican Republic, Honduras, and Guatemala qualified for the 2023 FIFA U-20 World Cup to be held in Indonesia. (Photo by Orlando SIERRA / AFP) (Photo by ORLANDO SIERRA/AFP via Getty Images)

The winners of the Concacaf U20 Championship semi-finals automatically qualified for the Olympics, something the United States men’s team hasn’t done since Beijing 2008.

The Olympic football tournament is primarily for U23 players, meaning the players in this U20 side will still be eligible for the US by the time the tournament comes around in 2024 in France, provided players have not switched allegiances by then.

Two players for whom this applies are Club Brugge left-back Mauricio Cuevas and Vizela midfielder Alejandro Alvarado Jr. both of whom are eligible for Mexico and are two of only three players in this squad playing their soccer abroad (along with Rokas Pukstas of Hajduk Split).

Though much of the focus was on the Union group, the Los Angeles-born pair impressed in this side with Alvarado Jr. operating in the centre of midfield as a No.8 or in the deep-lying role, and Cuevas playing as a full-back on either side.

The second goal in the semifinal against Honduras came from Cuevas’ cross from the left to Alverado Jr., who had spotted space to run into in the area. Though Honduras goalkeeper Juergen García would have expected to do better, the run showed anticipation and intelligence and the cross showed vision and was perfectly delivered.

As well as that Olympic qualification, teams who reached the semi-finals qualified for the 2023 U20 World Cup which will be held in Indonesia. It’s the first time the tournament, which is usually biennial, has taken place since 2019, when a United States team featuring the likes of Sergiño Dest, Chris Richards, and Timothy Weah reached the quarterfinals.

USA just edged the possession v Ecuador. Finishing let them down at times, which had been good in the tournament so far. #U20WC pic.twitter.com/z3aVB9S9uQ

It’s an important age group when it comes to player development and the transition from youth soccer to senior soccer, and these competitions offer tournament experience which is vital when it comes to making the step up to the senior side at international level.

The United States have plenty of quality players in this age group who now return to their clubs as better players for the experience, ready to break into their respective senior sides if they haven’t done so already. Philadelphia Union fans, and coach Curtin, will especially be looking forward to the return of their impressive quartet.

Loading...
Newer Post
What To Expect From Wayne Rooney At DC United
Older Post
Ngoma Goal Ensures Struber’s Red Bulls Come Out On Top Against Atlanta In Clash Of Styles