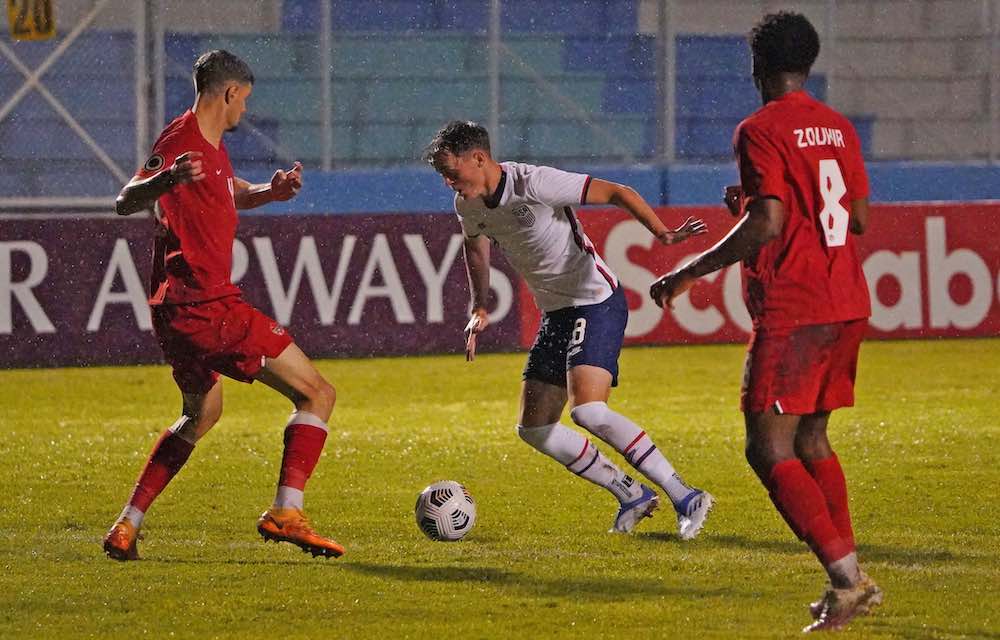 The U.S. Under-20 Men’s Youth National Team battled Canada to a 2-2 draw in its second Group E match at the 2022 Concacaf U-20 Championship. Despite dominating for long stretches of the game against Canada’s low block, the U.S. had to come from behind twice to earn a point on the evening, first on a rocket from midfielder Jack McGlynn in the 53rd and again on a hard-hit shot from forward Cade Cowell in the 72nd.

With the draw, the USA clinches a top-three finish in Group E and a berth in the knockout stage of the competition. The U.S. will face Cuba on Wednesday (8:30 p.m. ET; TUDN and Concacaf App, Facebook & YouTube) for first place in the group and a Round of 16 match-up against Nicaragua.

The U.S. got off on the front foot from the opening whistle, out-possessing Canada 72 percent to 28 percent and out-shooting its opponent 22-6 on the night. A number of good looks came in the game’s early-going as forward Quinn Sullivan had an attempt saved in the fourth and McGlynn had a shot stopped in the 10th, while the U.S. also threatened on corner kicks and forward Paxten Aaronson also made a number of threatening runs.

But it was Canada who got on the board first, getting the ball up to forward Lowell Wright against the run of play. The Canadian striker maneuvered through the U.S. defense to slip a soft shot past goalkeeper Chris Brady in the 15th. The U.S. kept pressing forward after the goal and earned a number of dangerous free kick opportunities in Canadian territory, but the USA couldn’t find the back of the net.

The breakthrough finally came after the break in the 52nd minute. Following a corner kick, midfielder Diego Luna played to McGlynn beyond the top of the box and the Philadelphia Union midfielder drilled his first U-20 international goal to equalize for the U.S.

What a rocket from Jack McGlynn pic.twitter.com/21GjysBnNm

While the USA pushed for a winner, Canada moved the ball downfield quickly to retake the lead in the 69th. On a cross into the box, an attempted U.S. clearance bounced past Brady for the Reds’ second goal. This time, the USA answered quickly, drawing even just three minutes later on another stellar goal. Luna played Cowell on the run down the left wing, and the forward drove through the defense before ripping a shot to the right side of the net.

It seemed like a winner was within reach for the hard-charging U.S. U-20s, but they weren’t able to convert any of a number of chances down the stretch. After a nice dribble through the Canada defense, Luna had a shot stopped in the 86th and another dangerous free kick, this time from Brandan Craig, went wide in the opening minutes of second half stoppage time.

Stories from the newswire.