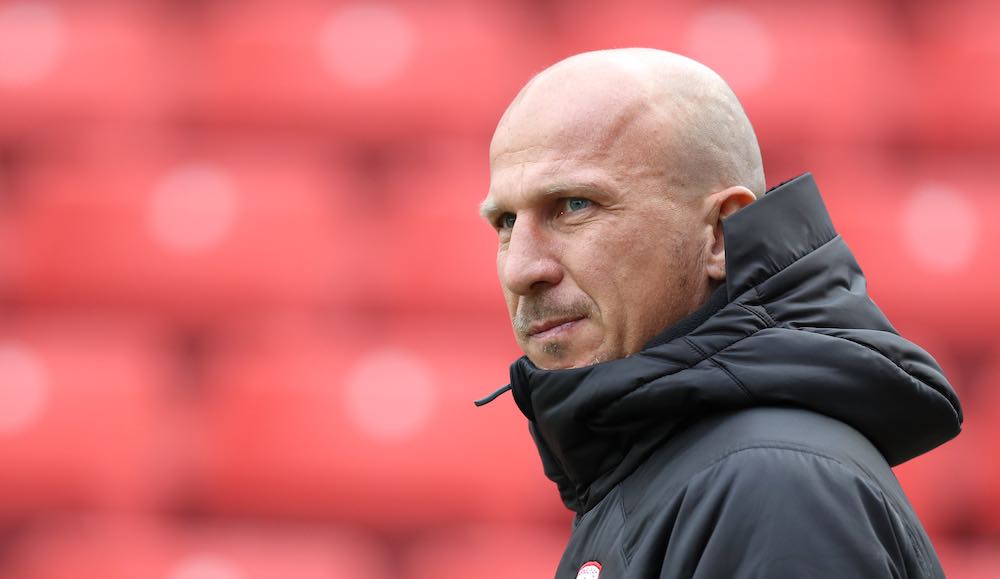 New York Red Bulls’ 2-1 win at home to Atlanta United was an interesting game when it comes to assessing the Red Bulls’ pressing tactics.

It saw them come up against a side with players, and a goalkeeper, with the technique to work their way around such pressure — at least most of the time.

The constant harrying eventually paid off for the Red Bulls, though, and they scored the winning goal late in the game directly from a high-pressing situation.

Gerhard Struber’s side is the hardest pressing team in Major League Soccer. They prioritise creating chances through pressing as much as possession, living by the Jürgen Klopp mantra that “no playmaker in the world can be as good as a good counter-pressing situation.”

They have the fourth-lowest average possession in MLS so far this season, but lead the league by some distance when it comes to pressing — in the final third of the pitch, in the middle third, and overall pressures — according to data collected on FBref.com.

FBref defines a “pressure” as: the number of times applying pressure to a player who is releasing, carrying, or releasing the ball. The Red Bulls have made over 1072 pressures in the final third this season, far ahead of the next highest, Los Angeles FC, who are on 769.

Overall they have made 3634 pressures across the whole of the pitch, with Philadelphia Union second on 2988.

They are a pressing machine, and their lack of possession means the players get plenty of opportunities to execute this.

Atlanta, on the other hand, are a possession-hogging side who have the third-highest average possession in the league. This leads to an interesting clash of styles, not dissimilar to the Red Bulls’ games against rivals New York City FC.

Atlanta played around the press well at times, even getting defenders to take goal kicks on occasions, and using 20-year-old goalkeeper Rocco Rios Novo as an extra outfield player during the buildup.

Rios Novo, who has come into the side as a replacement for the injured Brad Guzan, adds an extra dimension to Atlanta’s build-up play, and even just a few games into his MLS career already looks to be one of the best goalkeepers in the league when it comes to distribution and joining in build-up play.

This added an extra challenge for the Red Bulls, and they began the game by pressuring Rios Novo as well as the Atlanta defenders. The opposition persisted with playing out from the back and on many occasions did so effectively.

But the Red Bulls press was also effective at times. Atlanta were sometimes forced to pass longer and occasionally ran out of room as they looked to play around the press. At around the 80th minute, having taken the lead, Atlanta started going long with their goal kicks but the Red Bulls still found ways to press.

Struber’s side were perhaps most effective when they let Rios Novo find a pass before springing to pressure the receiver. Chasing after the goalkeeper often proved fruitless, but there were still occasions where Atlanta found themselves in trouble at the back.

The Red Bulls had substituted three of their four attacking players by the 70th minute, making sure there was still plenty of energy in that high press. It was also handy to be able to introduce one of the outstanding players in the league so far this season, Luquinhas, in the second half.

With the score at 1-1 going into the 89th minute, this paid off as the fresh legs of 16-year-old forward Serge Ngoma bore down on Alex De John, stealing the ball as the defender dallied before speeding through on goal to net the winner.

Serge Ngoma, 16-years-old, scores his first goal in @MLS to put us up late!!!@Audi | #RBNY pic.twitter.com/hbzm4WdgqI

This game had pit two of the most entertaining things to watch in MLS against each other — the Red Bulls press, against Atlanta — and their new, unique, goalkeeper Rios Novo — and their persistence in playing out from the back.

The Red Bulls eventually came out on top, through no fault of the man between the posts for their opponents, but through persistent, tireless pressure and pressing up until the final minutes of the game.

That the goal came so late, and that it was the first MLS goal for their 16-year-old prodigy and New Jersey native Ngoma, made the win all the sweeter.