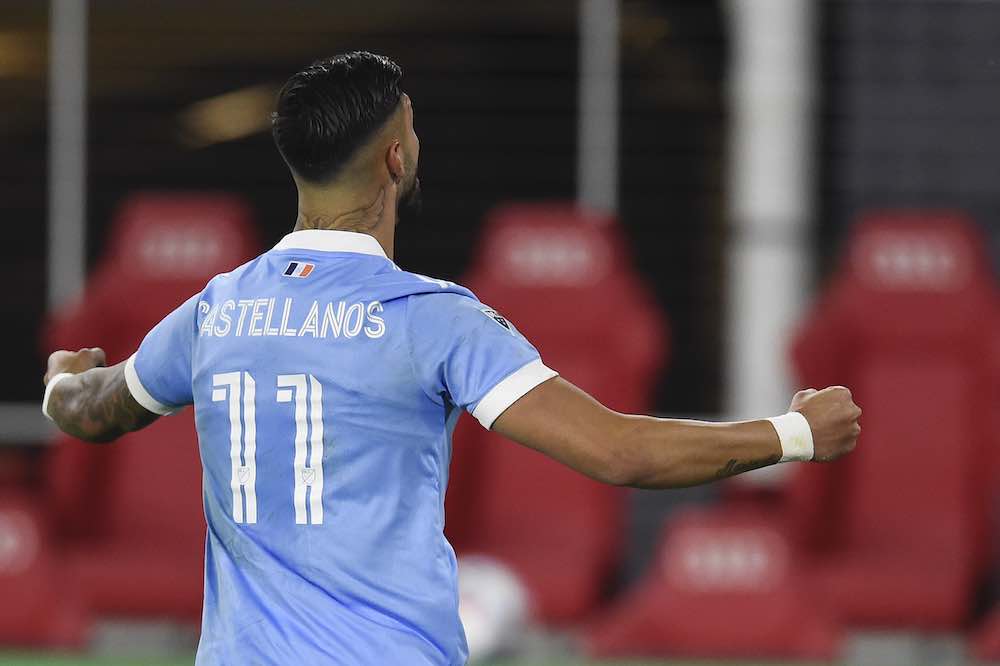 It was hardly the US Open Cup, but even a Major League Soccer regular season game with not much on the line — not yet, really, anyway — can be a heated affair when that game is a Hudson River Derby.

It helps that the two MLS teams with New York in their name are contenders for the Supporters’ Shield this season, and have style and quality that should see them expect to go far in the MLS Cup playoffs.

There’s a chance that we will get some genuine jeopardy — a winner takes all type game seen in that Open Cup quarterfinal — in the Eastern Conference playoffs, but for now, bragging rights will have to do.

And here, bragging rights are enough. Some games in MLS rivalry week can feel forced, but not this one.

At a commercial level, it’s a meeting between soccer’s empire-builders, Red Bull and City Football Group, but on the ground, the supporters of these two teams have created their own identities for these two sides in (the) New York (metropolitan area).

Both #RBNY & #NYCFC are out for warmups! Weather wise it’s humid but no sun. Both the stadium and press box are filling up nicely. #RivalryWeek #RBNYvNYC #NYCSN pic.twitter.com/wSn82mZTEp

Speaking of metropolitan, it was the team formerly known as the MetroStars who kicked off this 20th MLS Hudson River Derby. They did so with a ball back to defence followed by a hoof downfield which resulted in a goal kick for New York City FC.

Though it wasn’t intended to go straight out of play, it gave an indication as to how happy the Red Bulls are to let the opposition have the ball so they can press them.

NYCFC, on the other hand, are a possession team, though are surprisingly effective pressers themselves on the occasions they don’t have the ball. But the general tactical narrative of this game currently is one of pressing versus possession.

For much of the first half, the pressing had the edge. City had plenty of the ball but most of it in their own half. Once they’d dropped enough players deep to help beat the press they had no one left in attack.

Plenty of possession (69%) for New York City in the opening 45 mins but mostly in their own half, as shown by the passing network below. #NYCFC #HudsonRiverDerby pic.twitter.com/ywnqN0S4Ut

That was until late in the first half when Taty Castellanos made a chance for himself at the byline, taking the ball past Sean Nealis on the left but, as you might expect from such an angle, hitting the side netting with his shot.

The Red Bulls had had a few shots of their own, and Omir Fernandez was set up nicely by the ever-impressive Cristian Cásseres, but the shot was easily saved. Neither side really threatened in the opening 45.

Both teams tried to mix things up a bit in the second half. NYC goalkeeper Sean Johnson went long with a goal kick, even fooling the person in charge of the wide-angle camera, and the Red Bulls brought on an actual striker in Tom Barlow, having played an hour with a group of high-energy attacking midfielders in those forward areas.

Castellanos tried a spectacular overhead kick which Carlos Coronel made look more difficult a save than it was, but it was a sign that the Argentine was eager to get strikes on goal.

The important one came shortly after. On the shoulder of Sean Nealis, Castellanos was able to dart into position behind the defence to get on the end of Santi Rodriguez’s lofted pass. City’s top scorer stuck his leg out and Coronel was a mere onlooker this time as it nestled in the net.

Castellanos is heavily linked with a move to the English Premier League this summer, and performances like this will only increase the likelihood that a club will eventually meet NYCFC’s asking price.

Maxi Moralez forced a good save from Coronel late on as City saw out the win. It reinforced their dominance in the league this season, even though they hadn’t been able to defeat their rivals in the cup match at this arena in June.

They are a point behind Philadelphia Union at the top of the Eastern Conference with a game in hand. The Red Bulls, meanwhile fall six points off the top in the East but will be confident they can stay within touching distance from now until the end of the season.