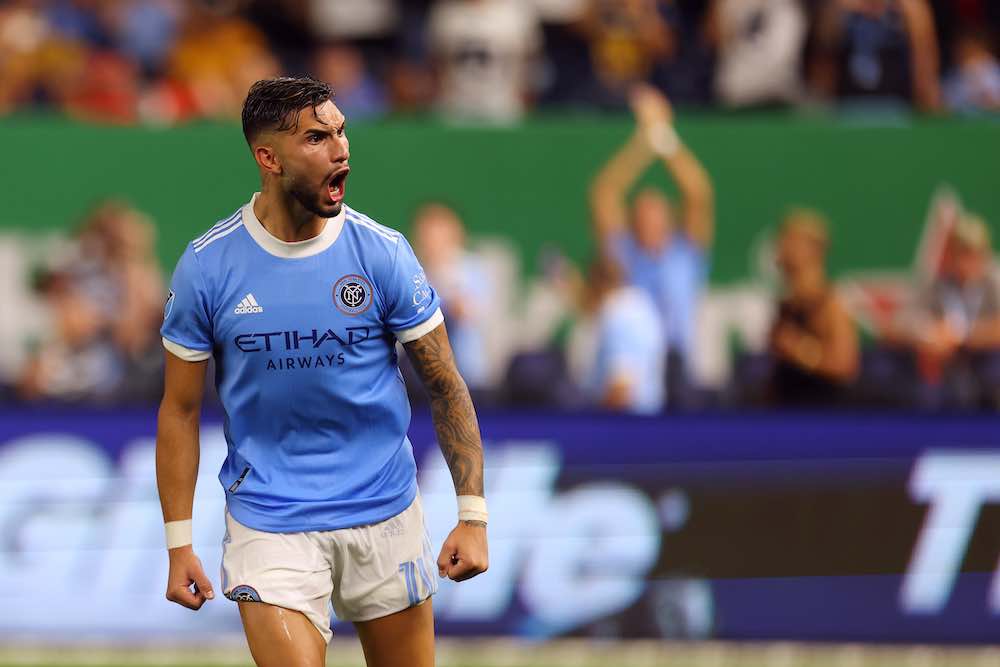 It’s a story that has dragged on but appears to have finally reached its conclusion. Valentin “Taty” Castellanos appears to be on his way to Spain, on loan to newly promoted side Girona FC.

Castellanos has had his future discussed almost constantly since New York City FC became MLS Cup champions at the end of 2021.

Leeds United had been heavily linked with the striker who was always certain to move this transfer window, but the English Premier League club’s interest slowly moved on to other targets and reports of links with River Plate have come and gone.

Castellanos has been proving his quality regularly in Major League Soccer and will leave having scored 58 goals in 132 appearances; the most recent being the winning goal in the derby with New York Red Bulls which finished 1-0.

The 23-year-old sits atop the goalscoring charts once again this season with 14 goals from 17 games and was the golden boot winner in 2021 with 21.

Castellanos’ move to Girona FC would be curious for a couple of reasons.

First and foremost, they are owned by the City Football Group so will be able to make all the arrangements without a third party. There will be a similarity in the way the club is run and the expectations for players and style of play.

Castellanos will go into the side as a starter, with Girona having a relatively small and young squad. Their main centre forward option is actually one of their experienced players, club captain Cristhian Stuani. The Uruguayan is now 35 years old and has been with the club since leaving Middlesbrough in 2017.

Being able to move to a partner club with the chance of first team football will give him the opportunity to show his talents in a top five league in Europe. But why weren’t others interested enough to make an acceptable offer?

We have seen a number of players leave MLS in recent years for sizeable fees, though have come with mixed results.

Miguel Almirón arrived at Newcastle for around $23 million and has struggled to provide consistency and a real goal threat in the Premier League.

Ricardo Pepi went to Augsburg in Germany for $20 million and is struggling to get up to speed with his new side.

Adam Buksa has recently left New England Revolution for RC Lens in France for around $10 million. He was another regular scorer and has broken into the Poland national team, but he’s transfer fee is around half of what NYCFC were asking for Castellanos.

It may be considered that clubs in Europe are not willing to meet the value NYCFC placed on Castellanos (around $15 million) as there is still a concern about how players adapt to European leagues.

Should he have been valued closer to Buksa’s fee, then there may have been more teams ready to take the gamble with a lower fee and less to lose if he does not settle.

For Castellanos, this move will give him the opportunity to show he is ready for the challenge of playing in Europe. He has been a key player for NYCFC and will become one in Girona once the deal has been completed.

The familiar back office and being part of another City Football Group club, also in a language he speaks, should help ease and speed up any settling in period.

Girona finished sixth last season in La Liga 2 and came up through the playoffs. They were a long way behind league winners Almería who finished with 81 points, Girona with 68. They will go into La Liga as a side with a different seeding to NYCFC in MLS. Castellanos will be trading a side competing for titles to a side whose main goal will be survival.

This different style will probably see less possession dominance, but Castellanos is one of the best strikers in MLS for his work off the ball and out of possession, as he is as a finisher.

Girona will be his chance to prove himself and other clubs around Europe may take more of an interest once they see how he performs in La Liga. In the meantime, this may not have been his first choice, but it is a great opportunity for both the player and Girona.