Will The New York Red Bulls’ Strikers Hold Them Back In 2022? 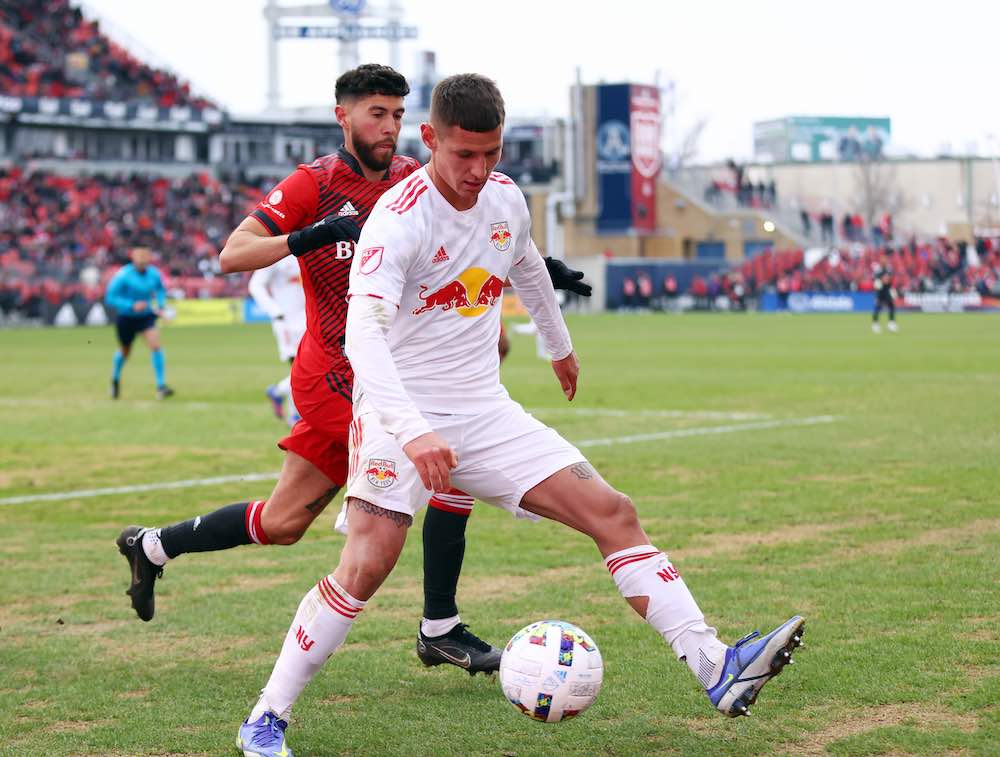 Sitting second in the Eastern Conference, New York Red Bulls will be quite pleased with their progress so far this season.

The signing of Lewis Morgan looks to have been an excellent acquisition, as has Luquinhas’s move to Major League Soccer from Legia Warsaw.

The attacking midfielders are providing quality on the ball as well as good work out of possession. The Red Bulls play a high press, high tempo style which has resulted in them conceding the fewest number of shots (126) so far this season in MLS, as well as having the fourth most shots (205) themselves.

As the season progresses, they look increasingly certain of a place in the playoffs come the end of the regular season.

With city rivals New York City FC one of the favourites for the MLS Cup, NYRB are looking at how they can compete in order to become the dominant side in the city.

Defensively, they have been solid, and their transitional play has often been impressive. Morgan is their top scorer with a good return of seven so far and goals have come from across the team.

What could be considered a concern is the lack of a regular scoring center-forward.

Patryk Klimala is the designated player in the center-forward position. The 23-year-old was capped for Poland at U21 level and arrived in April 2021 from Scottish Premiership side Celtic for $4.8 million.

In the 2021 season, he managed eight goals from 26 starts and this year has four goals in 10 starts, with five more appearances off the bench.

Klimala works very hard off the ball, and his defensive duels stats measure up well with another striker with limited goals, FC Cincinnati’s Dominique Badji.

Klimala is involved in 4.38 defensive duels per 90 with a 50% success rate, and Badji has 4.51 with a 59% success rate. Badji’s work is as a second striker, working hard to put defenders under pressure and create opportunities for others, but Klimala is tasked with combining this defensive work with being the main striker and goal threat for his side.

Gerhard Struber’s tactics will highlight that the need for a 20-goal-a-year striker isn’t part of the initial set-up. It is a group effort to get the goals to win games. Despite this, having a striker on just four goals at this stage of the season could be considered a slight concern.

Klimala is scoring under his xG (6.05) so far this season. He has 30 shots from 937 minutes, scoring four times. In comparison, before leaving for RC Lens, Adam Buksa had 30 shots from 968 minutes in MLS and managed eight goals — twice as many. What is interesting is that both their shots on target percentages were the same — 46.67%.

So Klimala is getting shooting chances, and getting those chances on target, but they are failing to trouble the opposing goalkeeper as much as other strikers in the league.

Ashley Fletcher’s poor performance against Charlotte last week sees him placed rightfully on the bench with Omir Fernandez as the lone striker in Klimala’s absence. I think this could open the door for a fluid attacking structure for #RBNY against Toronto tonight.#RBNYvTOR https://t.co/87K4RIaz5V

Behind Klimala, Ashley Fletcher was brought in on loan from English side Watford, though his disappointing performances would suggest the loan will not be extended or made permanent.

Tom Barlow has made a number of appearances, mostly off the bench and has two goals this season. He is proving to be an adequate back up in a system which can take a lot out of a player given the relentless pressing the strikers are required to do. Despite this, he is not a player that will become relied upon to bring goals in the big games later in the season.

The Red Bulls look set to continue with Klimala this season. Though a new striker on a Designated Player contract could help this side, it’s difficult to see it happening with Klimala still having two more seasons on his contract after this one.

Should they decide not to retain Ashley Fletcher, a spot will open up though, and adding more depth to this roster would be a useful way to prepare for the playoffs later this year.

You only need to look across at Philadelphia Union having similar issues with Mikael Uhre coming in and taking time to adapt. The Union have only managed 20 goals and Uhre has just two. Having only conceded 11 goals they have scored 20 — the issue in Philadelphia is that from 15 games they have eight draws, NYRB have five draws and both are the most in the Eastern Conference.

Without a regular goal scorer, both sides are showing it can be hard to cement a lead in games at times and draws can occur regularly when games remain tight throughout.

If Klimala is not to outscore his previous season’s total of eight, questions about his role will become more prominent.

It has been a few years now since Bradley Wright-Phillips left the club as their top scorer in its history (now back in a technical role) and fans would like to have such a talismanic, figurehead player back in the starting line-up.

If not now, 2023 could see a big move in this area for New York Red Bulls.