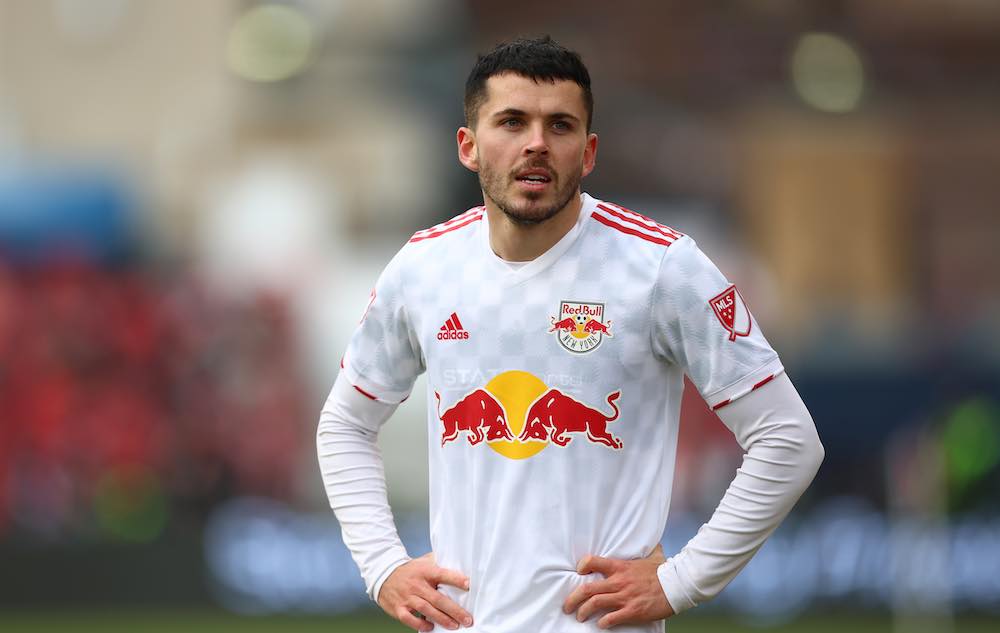 The Red Bull franchise has a clear philosophy across its soccer teams around the globe and, like its drink, it is full of energy.

New York Red Bulls are showing this desire for quality of possession over quantity; not slowing the game with extended possessions, but hitting the opponent with unrelenting pressure and pacy transitions.

Out of possession, NYRB has registered the most defensive duels of any side in Major League Soccer, and by some distance. With a league average of 1,023 duels, NYRB players have been involved in 1314 ahead of second-placed Philadelphia Union with 1,223.

That number produces an average of 75.13 defensive duels per 90 (the league average is 61.81) which shows the pressure opposition players are being put under throughout the 90 minutes of a game. Impressively, NYRB have a success rate of 63.8% as well, which is again higher than the league average of 59.77%.

Gerhard Struber’s side has shown how they can be successful in closing down from the front through hard work out of possession across the whole team.

Their defensive duels are not limited to their own half, they start in the front line. According to FBref. they have made 977 pressures in the attacking third to date, which is a massive amount when compared to the rest of the league. The second highest is 719, by Los Angeles FC.

By closing down high up the field, they give themselves the opportunity to attack immediately and in transition when opposition defenders are unorganised.

They have a lot of pace with players like Lewis Morgan playing in attacking positions in a 3-4-2-1 formation. Strikers like Patryk Klimala and Omir Fernandez provide the immediate pressure, with the two forwards alongside them providing the pressing cover.

By pressing high and beginning their defence in the opponent’s half, NYRB limits the number of opportunities they give up in their own half. They have conceded the fewest number of shots against in MLS so far with just 126, just 7.2 per 90. The league average is 175, showing the clear advantage of stopping opponents from building attacks.

New York Red Bulls have been by far the most aggressive pressing side in the 2022 MLS season#RBNY have so far pressured, tackled or fouled 32%(!) of their opponent’s pass receipts within two seconds pic.twitter.com/6YFFiGdVI2

Limiting the space and time the opposition has to build an attack will force them to play in transition as well. They do not have the opportunity to build attacks in the way they would sometimes prefer, which can limit their potential danger to the Red Bulls’ defence.

They are the only side in MLS with more than 200 successful tackles to date. FC Cincinnati is second with 196 and NYRB has 235.

As mentioned, with their high press and their limiting of attacking build-up, they force the opponents to carry the ball more than they would like. By forcing transitions, players are often isolated and forced to run with the ball at the Red Bulls defence.

FBref shows that NYRB have made 144 tackles against a player dribbling the ball, more than second-place Orlando City with 117; while the total number of attempted dribbles by opponents in their games is 355 — again this is the highest in MLS with LAFC second with 275.

By forcing opposition players to carry the ball, they limit the quality of their possession. When playing a high-pressing side, managers want their players to keep possession and make their opponents run and chase the ball to tire them out. NYRB do not give their opponents the chance to do this.

TORONTO, ON – MARCH 05: Lewis Morgan #10 of New York Red Bulls celebrates his third goal during the first half of an MLS game against Toronto FC at BMO Field on March 05, 2022 in Toronto, Ontario, Canada. (Photo by Vaughn Ridley/Getty Images)

NYRB aren’t a man-marking high press side. Their shape dictates their tempo, optimising wing-backs and two wider forwards alongside their centre forward. They push play wide where possible in opposition build-up, and look to block passing lanes out and inside for the opposition full-backs.

The wide forwards and wing backs close down, while midfield and defenders get tight with potential pass recipients to ensure play is closed down quickly or forced backwards. Should their initial press wide be broken, they recover and close the field in central positions, making areas tight and hard to break through.

The intensity of the Red Bulls’ press is also highlighted by the low number of passes per defensive action. They are second only to rivals New York City FC (6.88) with 7.86.

The defensive actions include interceptions, of which NYRB have made the most in MLS with 289 so far (FBref).

Struber’s defenders play a big part in this. They are not passive or merely holding a line. They step out and look to intercept forward passes where possible. Aaron Long has an average of 4.36 interceptions per 90 so far this season, for example, and this is a key part of their attacking transition.

By intercepting and stepping out of the defence with the ball, NYRB have the chance to immediately attack. Forward players have the opportunity to make dangerous runs at defenders who are recovering in transition, which can often open up passing lanes to build quick attacks.

When in possession, they give themselves the chance to open up leads over opposing teams through their regular chance creations. They have registered 205 shots so far — the 4th most in MLS — and have hit 40% of these on target, and only twice in their opening 16 games have they failed to score.

This high-pressure style of play makes it entertaining for the fans, with guaranteed goalmouth action in every game.

As well as being entertaining, it has also been effective so far, with NYRB sitting second in the Eastern Conference with 26 points from 16 games.

They are looking like a tough potential playoff side come the end of the season, should they be able to maintain the high levels of pressure and intensity throughout 2022.