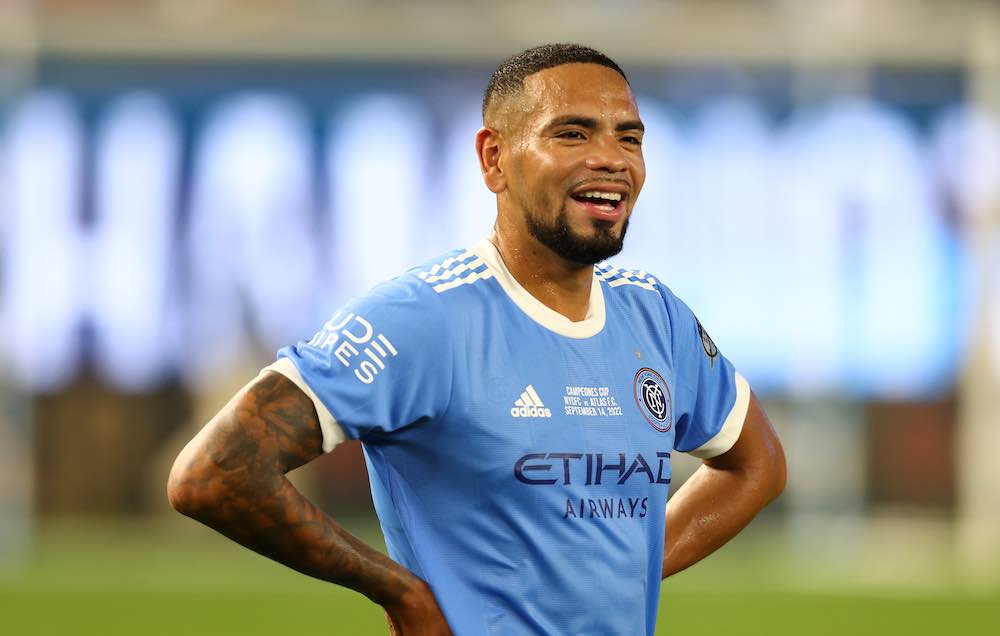 The latest Hudson River Derby took place at Yankee Stadium with New York City FC just having won their second trophy in the space of a year there days earlier — a Campeones Cup to add to the Major League Soccer championship they won at the end of 2021.

New York Red Bulls, meanwhile, are currently ahead of their local rivals in the standings, sitting third in their conference with a playoff place already secured.

“It is crystal clear that we will win this game,” Red Bulls coach Gerhard Struber bullishly stated ahead of Saturday’s game.

“We will win against them, and then it’s clear we clinch the playoffs and we would also have a good slot in the table.

“We want the home game [in the playoffs]. We will play for our fans and we will fight for a good position in the table.

“New York City is not a normal game. This is a game [to see] which club is further in the process and which club is the number one in the city, and it’s crystal clear that we will win the next game.”

“It is crystal clear that we will win this game.”

Neither club has been totally convincing on the field this season. NYCFC has been in a slump since losing their 2021 MLS Cup-winning manager Ronny Deila earlier in the season, followed not long after by the departure of their sharpshooting top scorer and one of the best players in MLS, Taty Castellanos.

Gong into this game, City had only won one of their last ten game in MLS, losing seven and drawing two in that run. The Campeones Cup win, secured in a one-off game against last year’s Liga MX champions Atlas, papered over some cracks but could also have acted as a booster for their flailing season.

The Red Bulls have been reasonably efficient, if not the most popular among neutrals or even their own fans at times. But four wins in their last six games — with the only defeat coming against the apparently unstoppable Philadelphia Union — has seen them become the in-form New York team and the one you might be most likely to back for a playoff run.

It had taken Alexander Callens less than five minutes to score the opening goal in that 2-0 Campeones Cup win against Atlas earlier in the week, but he managed to better that here, taking less than a minute to give NYCFC the lead against the Red Bulls.

He was on hand to head in a hooked ball into the box from Santi Rodriguez after Maxi Moralez’s corner.

Such an early goal can disrupt the Red Bulls’ plan, and they did struggle to enforce their intense off-the-ball pressing in this game, or at least do so effectively, even though the narrow Yankee Stadium pitch should make counter-pressing easier.

Nick Cushing’s #NYCFC using a fairly flexible defensive line formation against Red Bulls. Can go from 5 to 4 to 3. O’Toole a key player in the system. At times the most advanced, but sometimes back in the defensive line forming a five. pic.twitter.com/Lg6uRPpKKy

Not long after his goal, Callens was clearing a ball off the line at the other end of the field following an error from City goalkeeper Sean Johnson. The Peruvian making important interventions, and showing the type of 100% alertness and concentration in both boxes that you need to make a difference in derby games.

NYCFC doubled their lead when the Red Bulls once again failed to defend a cross. This time it was Gabriel Pereira’s ball in from just outside the box following another corner, which was eventually turned home by Rodriguez.

The Red Bulls had a goal disallowed just before halftime, but there were two offsides to choose from — either from Aaron Long’s initial header or Elias Manoel’s finish.

The visiting side improved at the start of the second half, and Elias Manoel should maybe have done better when through on goal, but Johnson interrupted the Brazilian as he carried the ball into the box, before Caden Clark skied the rebound for a home run.

Omir Fernandez missed a decent chance to get the Red Bulls back into the game, and as the half went on it looked ever-increasingly like NYCFC would not let their deserved advantage slip.

NYCFC deserved the win, though there’s still a sense that they are not yet firing on all cylinders.

Nevertheless, this week has now seen two massive wins for Cushing, and it’s one that has ended it with both a trophy and local bragging rights.

It will be especially sweet for the blue side of the Hudson River derby after those pre-match comments from Struber.

The three points also take NYCFC one behind their rivals in the table as both hope for a home tie in the playoffs and currently sit in positions that will secure such an advantage. If City can improve, then there is hope for them in the playoffs if they can hit a run of form at the right time.

And for the Red Bulls, their position and recent form mean all is not lost even though this is a bitter defeat.

They can also look to push on now the difficult derby is out of the way, and hope they have the energy left in the legs to carry out their pressing style into the postseason, which will not be easy for either team, but when looking at the pair of New York teams, any opponents will not expect an easy ride, either.