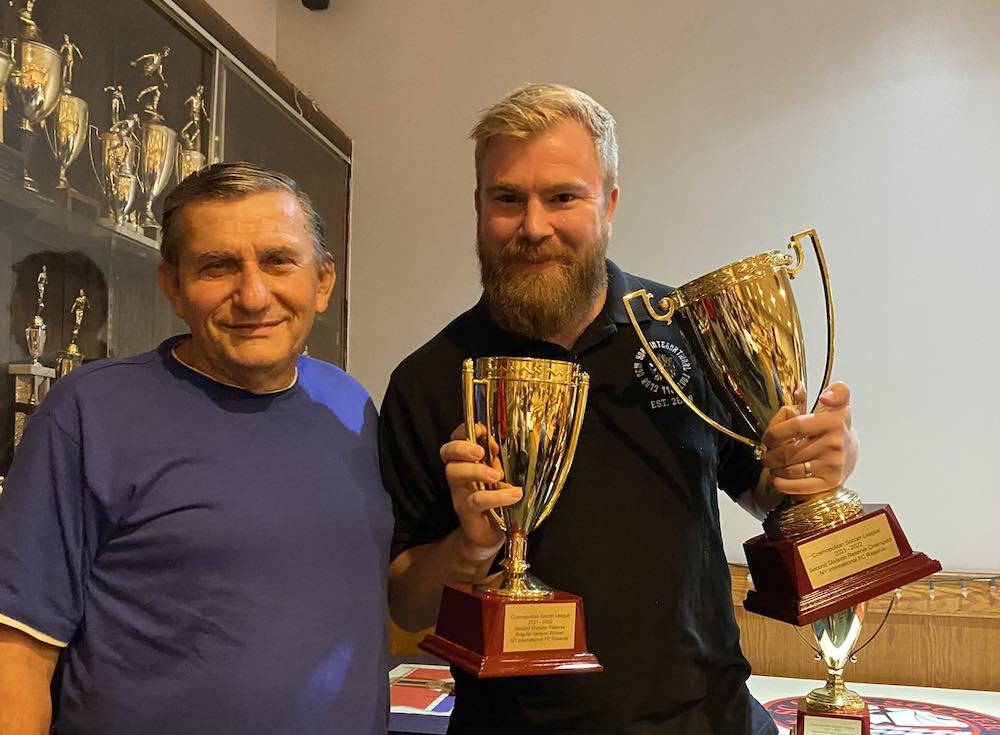 After a successful freshman season in Division 2 of the Cosmopolitan Soccer League, Chris Hicks of From the Lion’s Mouth had a chat with New York International FC president Nick Platt about his thoughts on the previous season and also looked ahead to future challenges.

From an organizational perspective, how successful do you and the board view the concluded Division 2 inaugural season?

“Before the season, I said to the board that I would be happy if we could reach 4th place for the first team, and just asked that the reserves be competitive.

“It was a real transition year for us going from one to two teams. It brings a huge amount of challenges with it and so I felt this was a good objective for us as we acclimated to the division and figured out the logistics of two teams within the club.

“One of the main things I felt was important for us to implement was a ‘One Club’ mentality to ensure that we stayed united and ensured that both squads were utilized effectively. This was another objective I felt we hit and that Gary [Philpott] and [Christopher] Minty respectively did a great job bringing to fruition.

“As one club, I wanted players of either team to know that they were not restricted by the squad they were initially assigned and could play their way into either manager’s plans.

“Across the course of the year, over 40 players of our 60-man roster played games for both sides, so I was really pleased with how this was implemented.

“The fact we implemented this, managed to finish 4th with the first team, and win the reserves championship was a huge achievement.”

Despite ending the season with perhaps not the greatest record, how pleased were you with the overall success of the first team?

“After how we started the season, finishing 4th definitely felt like a missed opportunity to some. I was personally happy we had met our initial target, particularly when you factor in the amount of adversity the club had to deal with last year.

“I was so proud of how the club maintained focus, played beautiful football, and rallied around each other. The first team also had some incredible results in the cup and were so unfortunate not to walk away with a trophy.”

The Reserves brought home yet another piece of silverware for the club. Has the annual on-field success translated into easier recruitment?

“Success always helps and it is definitely an attraction as people want to be a part of progress, but I also feel we have one of the best setups across the Cosmo league.

“I feel the board, managers, and players all help make the club a wonderful place to be; offering great training, coaching, comradery, video access, great kits, and just a place to feel good playing the sport we love. Long may it continue!”

The organization is very active behind the scenes as well. There’s the consistent appearance of NYIFC players/members who give their time to EV Loves NYC, the Davide 5k, the 4v4 tournament to help raise funds for EV Loves, and social media endeavors to get funding for EV Loves.

How important has it been for you as Club President that the club create this kind of community presence? Does the organization have other plans?

“One of our core pillars as a club is to be an active part of our wonderful community. When we say we are a community club, we truly want it to be evident in our actions.

“We hope the small amount we can do to give back makes an impact, and it has been an honor to connect with wonderful organizations that do this day in and day out.

“Our partnership with EV has been a huge highlight, as well as the 5k we organized in memory of Davide. We have actually recently brought on a new member to our board, Nick Alexandrakos, whose role is to hold us accountable and ensure our community engagement continues on this positive path. He has been a brilliant addition so far!

He definitely earned the role, but what factored into your decision in appointing Chris Minty as first team manager?

“We actually took some time to, as a group, review the season and think about next steps. We considered some external candidates but ultimately, we knew Minty was a driven, passionate, successful coach.

“He has been invaluable since he joined the club and so it actually made it a very easy decision that we would promote in-house. Once again, this helps showcase the One Club mentality.

“We then handed over the Second team manager responsibilities to Coco Claisse, who has also been with the club a number of years and formed a key part of the board. He in turn has appointed Manus McGuire as his assistant.

“I’m incredibly happy with the teams we have in place now, and know the teams are in good hands with beautiful people who love the club.”

The Division has been restructured, would you like to explain how promotion will work for our readers outside of the CSL?

“D2 has been restructured due to the addition of a number of new teams. The division is now separated into two conferences, with NYIFC playing in the East Conference.

“The top two from each conference at the end of the season will play in a four-team play-off tournament to determine the overall champion of D2.

“The two finalists will secure promotion, whilst the bottom two from D1 will be demoted to D2 for the following season.”

What goals and expectations do you have for the club going into this season?

“This season has again been a real transition year. We had a number of players leave the club at the end of last year due to leaving the New York area.

“Four first-team players returned to Europe, and our former first-team manager left the club as his family moved to Colombia.

“Whilst it is always incredibly sad to see teammates leave, we know they will enjoy success in all they do next. I’m hopeful that we will continue to improve on the results and finishes from last year.

“This season so far has had mixed results across the Division for all teams, but as things settle, I know we have the ability to be in the mix of the top teams. We had to replace a number of key positions, including goalkeeper, striker, and center-backs, but we have made some great additions now and I’m very confident.

“I think that confidence is outlined by the incredible result in the cup, winning 5-0 against a good EDSL team. I hope we will be talking again at the end of the season, discussing our playoff hopes!

“Massive thank you to you, Chris, for taking the time to chat with us and following everything we do.”

This article was originally published on From the Lion’s Mouth. Republished with permission.